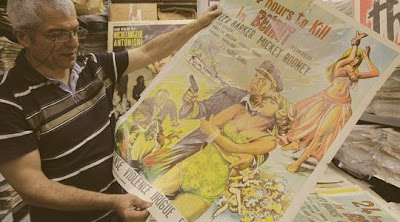 Ladies & gentlemen, we're leaving Egypt today after a few weeks in the compagny of Abdel Halim Hafez. Our next stop will be in Thailand and it's amazing music! As we're now flying over Lebanon, let's enjoy LES PLUS GRANDS ARTISTES DU MONDE ARABE (Music For Pleasure M046-97804 from 1976).

This LP is a great compilation featuring some of the most famous lebanese singers from the 60's to mid 70's (and also Omar Korshid from Egypt).

Mandolins, darbukas, electric guitar, great vocals... This record is a perfect introduction to lebanon 70's music, modern and traditionnal at the same time, I guess many people who bough it when it first came out had hard time trying to get some more.

"Right now,
unfasten your seatbelts...
Let's make some room in the corridor
and start to dance!!!" 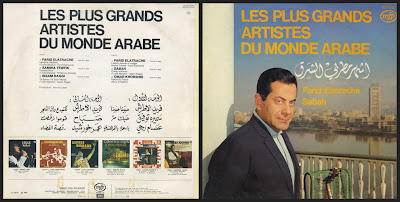 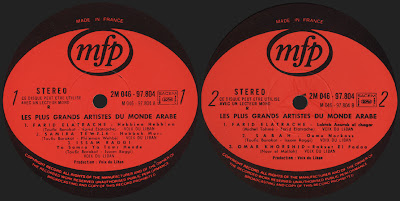 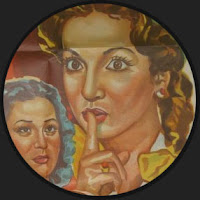 Ladies & gentlemen,
This is our last week in compagny of Mr Abdel Halim Hafez.

There is not much to add to the previous posts exept: AAIT DAMAIT HOZEN...LA (Soutelphan records GSTP34, from 1974).

This live recording is in the same mood as last weeks HAWEL TEFTEKERNY lp's we got (though this one is way more scratchy). More informations on post KTK52 and KTK51 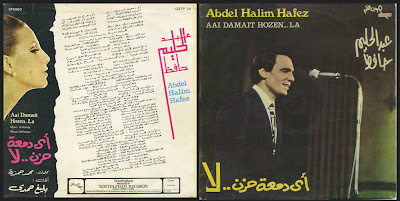 Ladies & gentlemen...
This is our second week in Egypt with Abdel Halim Hafez. This week we get some kind of a conceptual recording.

HAWEL TEFTEKERNY (Sawt El Arab, HPC 10007 from 1974) is a live recording. In the last years of his career Abdel Halim Hafez focused mostly on live performances so most of his recordings where from concerts (usually also broadcasted for tv). Unlike most Egyptian singers of this era Abdel Halim Hafez opted for a new way of composition of long musical pieces instead of the commercial "7' inches" format.

This record features 42mn from the total performance. On this piece Abdel Halim Hafez's composition flirts with occidental opera and Arabian poetry and mixes many instruments to his original Arabian folk songs style (electric guitar, organ...). This "classicist genre" was concidered to be a new step in Arabian music, a way choosed by a few other musicians including Oum Kalthoum that disappeared a few years after the death of  Abdel Halim Hafez. 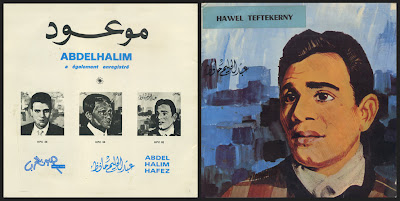 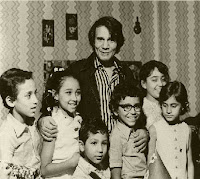 Ladies & gentlemen, after a few busy weeks leaving you with some CD compilations, your captain is back on duty!
Though the next flight plans will lead us to some Asian tapes we'll first celebrate the end of this year's Ramadan with a serie of high class oriental LP's featuring one of the most renowned Egyptian crooners of the sixties and seventies...

We'll start this homage serie with AN EVENING WITH ABDEL HALIM HAFEZ (Cairophon, LPCXG139 from 1973). Though the name and cover picture would let us think about a live recording this brilliant Lp is made of studio sessions. Don't worry, the next 2 weeks will focus on some of Abdel Halim Hafez (عبد الحليم حافظ) live performances.
Better than telling you about his successful career, let's read the notes from the cover and some online informations (note that Abdel Halim Hafez died only a few years after this recording). 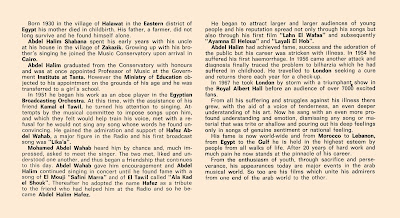 We'll get a bunch of luxurious songs featuring wide orchestrations including occidental and oriental influences. As usual Abdel Halim Hafez combine his voice and instruments with talent, mixing modernism and tradition, incorporating various kinds of instruments: Mandolin, saxophone, electric guitar, organ, accordion, both arabian and occidental strings, piano... (not especially in today's recording but in the whole serie of recordings).

This record flirts with some "hollywoodian" (yet bollywoodian) feelings, bold Arabian style, deep love songs and a hint of sadness... It's interesting to note that Abdel Halim Hafez has been featured in many blockbuster musical movies (including the big hit Abi Foq al-Shagara) and that he was known as the "Egyptian Frank Sinatra"... 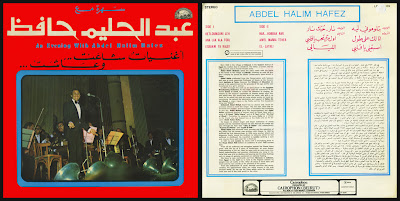 Grab a cup of tea, some dried fruits and start to whistle along with "el-Andaleeb el-Asmar" (The Black Nightingale) as his fans in all the arabian world would call him.
Aïd mabrouk!

Ladies & gentlemen, this is NOT your captain speaking!

The captain is going to be busy for a little while and better than stopping our journey he prefered to set things to "auto-pilot".

During the next few weeks, we'll continue to fly around but we'll make things more simple with "digital" instead of our usual vinyl trips. Things will get back to normal as soon as possible...

This week we get some various music from French Antilles and Latin America from the 60's to the mid 80's. From a 5 cd's box set. Today is CD 5 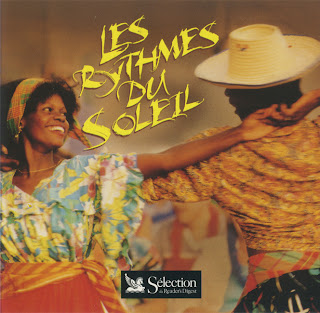 Thanks for flying with KTK