Ladies & gentlemen, this is your captain speaking...
This week we're ending up our little trip around South East Asia. Nothing surprising today as we'll follow some previous posts from a few months ago about Vietnamese popular music during war time.

The big difference is that this time it's not a record produced by Vietnamese people, it's an outsider's view that mixes music, historical document and environemental atmosphere from deep inside the jungle: CHANTS DES MAQUIS DU VIET-NAM (Le Chant Du Monde LDX-S-4316 from 1968). Recorded in the Jungle by Madeleine Riffaud (who is also credited for the photos and texts) is an interesting Lp on quite a few levels. at 18' Madeleine Riffaud became a young heroin of the world war 2 French resistance, she is a poetry writer and a war time journalist (she covered the war in Algeria and in Vietnam). She is still active and she recently produced some documentaries about those subjets.

This recording is not only a great militant of peace and freedom document but also an interesting point on the music of this era. It mixes gongs an other percussions, men and women vocal ensembles, traditional songs and also atmosphere recordings (kids playing, birds, radio...). The sound is a little windy but it's a great listening! 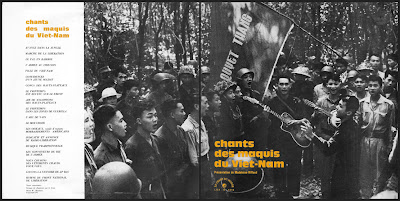 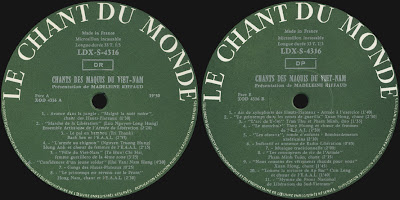